Eggs are one of the oldest ingredients of food in China, witness the 2800-year old eggs on exhibition in Nanjing.

Chinese cuisine includes many dishes with eggs as the main ingredient; fried tomatoes with eggs probably being the simplest as well as the best known. Don’t forget to add a little sugar en chopped garlic, just before turning of the heat.

Eggs can also be used as a minor ingredient to add bulk and texture to a variety of dishes, sometimes as a replacement for meat.

Fresh eggs have special meaning to the Chinese. Eggs are auspicious food, a symbol of fertility, of longevity, of new life. The birth of a child is celebrated with the delivery of hard-boiled eggs to friends and relatives, often dyed a brilliant red in honour of the occasion. Eggs are also a part of the bride’s dowry, sent by her family on the wedding day to her husband’s home as a sign of her potential fertility. They reciprocate with a gift of live chickens.

Birthdays are also marked with noodles and eggs all over China, and even as an ethnic Chinese growing up abroad, I remember my grandmother making a bowl of vermicelli for me with a large egg on top, dyed bright red, of course.

However, eggs are a perishable product, which is why many rural families still keep chickens so they have a steady supply. Chinese have developed a few ways to preserve their shelf life. I am introducing three of these in this post

First, let’s set straight the myth hidden in that Western term. They have not lain forgotten for 1000 years, despite the name. Instead, pidan, as they are known in Chinese, are carefully cured for several weeks to several months so that the albumen solidifies into a dark, transparent, gel-like semisolid while the yolk hardens slightly on the outside but remains molten in the centre. There are strict culinary standards on what makes a pidan a gourmet experience.

Pidan are always eaten with condiments. They may be served with sweet slices of pink pickled ginger, doused in sesame oil and vinegar, or smothered in minced garlic or chopped cilantro leaves.

The most common raw ingredient for pidan is duck eggs, valued for the size of the yolks and the generosity of the egg white. However, chicken or quail eggs are also used, but more for novelty rather than need. A good century egg often has a snowflake pattern on the outside of the white, an indication of a well-cured egg. Its fearsome colour is the result of a chemical reaction with the curing mix usually wood ash, salt and rice husks mixed with clay or lime.

Pidan can even become a lucrative export product. The Shiqian region of Guizhou has been producing pidan for over 600 years. The local government has realised its potential value and supported modern industrial production of its traditional pidan in 1993. The state owned enterprise was dissolved in 1995, but its manager continued the production as a private entrepreneur. The company currently produces more than 10 mln eggs p.a.  Shiqian pidan were already exported to other Asian countries, in particular Malaysia, but more recently exports to the US and Canada, with their growing Chinese population, have also increased. 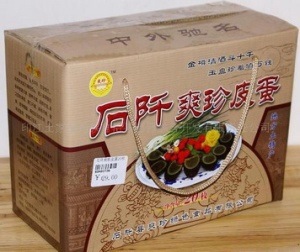 Another popular staple is the salted egg, a pure white delight that is as visually attractive as its cousin is not.

Eggs from either chicken or duck are carefully wiped clean with Chinese liquor and placed in bottles of saturated brine. After a month to several weeks, the whites would have thoroughly absorbed the salt, and the yolks hardened into little golden globes.

Salted eggs are most often boiled and then split and eaten straight from the shell. They are also used for cooking. The salted egg yolks are vital ingredients in many seasonal foods, including the rice dumplings eaten during the Dragon Boat Festival and the sweet moon cakes during Mid-Autumn festival.

Tea eggs are usually prepared at home. Brew a pot of tea. You can use any Chinese tea, but a dark tea like Pu’er will taste stronger than green tea. Place the tea and tea leaves in a pot, add a piece of star anise, a stick of cinnamon and either some cloves or cardamom. Add soy sauce and enough water for the liquid to come halfway up the pot.

Wash about 10 eggs and place them in the pot to boil. After 15 minutes, remove the eggs and gently tap them to crack the shells. Turn off the heat and return them to the infusion. You want a marbled effect. The flavours and colours improve if you also break the membranes so the tea infusion can penetrate. Then wait, to allow the eggs to soak in the tea sauce for a few hours, preferably overnight. You’ll be rewarded for your patience with the most flavourful hard-cooked eggs you have ever eaten.

You can reuse the tea sauce to cook more eggs when the first batch is finished, but remember to either add more tea or soy sauce to adjust the seasoning.

Innovation in food is one of the core themes of this blog. A Chinese organic farmer in Taiyuan (Shanxi) has redefined the concept of ‘natural’ eggs, better known in the Western world as ‘free range eggs’. His term is ‘original eggs (tujidan)’, which he defines as ‘eggs resulting from natural insemination of the hen by a cock’. This is even more humane that simply allowing chickens to walk around freely.

The yolk of the resulting eggs is brighter yellow than those of mass-produced eggs and are said to be lower in cholesterol. Strictly speaking, this is not really innovation, but simply going back to basics. Still, it is a development worth pointing out.

The general trend in the Chinese food industry towards more convenient products has also affect this sector. Recently, Master Shen Food (Anhui) launched a ready to eat egg product: dried eggs. This is a truly innovative product. It imitates traditional Chinese dried bean curd, but is made from eggs, making it a more nutritious product. The ingredients:

China exports some of its egg products as well. Hubei province was China’s top exporter of for the 10th consecutive year in 2019, generating an income of USD 90 mln.