China’s honey consumption ranks first in the world. China is the world’s largest bee keeping, honey production and export country. China’s vast territory, rich nectar source, large population, with an increasing living standard, guarantee that the domestic honey market potential is huge. The current per capita consumption is a little over 250 gr p.a., while that for Austria is more than 1.3 kg p.a.

According to the National Bureau of Statistics, China’s honey production has been increasing steadily over the years. I was 542,500 mln mt in 2018. In recent years, the domestic market share is growing. The following table lists the China’s honey exports and the proportion of domestic sales in the period 2001-2016 (units: 10,000 mt).

China has a number of top honey brands. It is not easy to rank them in a sensible order. Most brands are specialized in a particular type of honey, e.g, Baihua’s bramble honey, or Laoshan’s locust honey. The top 5 brands according to a Chinese consumer site are: 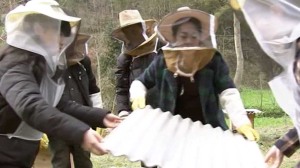 Miyun includes the largest beekeeping area in Beijing, with 2,072 bee farmers tending 115,000 colonies, which account for 44% of the city’s total. The district will add another 5,000 colonies in 2021.

In spite of the negative media coverage, China still exports considerable volumes of honey. The following table shows the exports to the main destinations in 2017.

An unfortunate aspect of the Chinese honey industry is that its lucrative nature has also made it a popular arena for fake products. Even worse is that part of this fake or adulterated honey has made its way on the international market, seriously harming the image of honey from China.

Because of the many fake honey products in China, quite a few Chinese prefer to buy imported honey. The following table shows the import figures of the Chinese Customs regarding the 2013-2016 period.