I originally wanted to post this product on the Trends page of this blog, as a notable innovative product. However, thinking more about the history of how the White Rabbit brand has developed (also see my post on candy), I believe it deserves a separate mini-post on the main page.

White Rabbit Creamy Candy was originally manufactured by the ABC Candy Factory of Shanghai in 1943, when a merchant from ABC tried a milk candy from England and thought that the taste of the candy was not bad. After half a year of development, he then manufactured the factory’s own brand of milk candies. The main ingredient is not raw milk, but sweetened condensed milk, the oldest indigenous industrial dairy product in China. The oldest producers was Baihao, established in Zhejiang province in 1926. The first ABC milk candies were packaged using a red Mickey Mouse drawing on the label, and were named ABC Mickey Mouse Sweets. As their prices were lower than imported products, they became widely popular among the people. 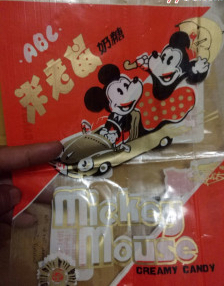 In the 1950s, ABC became a state-owned enterprise. As Mickey Mouse was seen as a symbol for worshiping foreign countries, the packaging was redesigned to feature a White Rabbit and an artist’s paint palette with Chinese and English hand-lettering in a colour scheme of red, blue and black against a white background. The result was a distinctive candy label design that became instantly recognizable around the world. Initially, production of the candies was capped at 800 kg per day, and they were manually produced. In 1959, these candies were given as gifts for the tenth National Day of the China. In 1972, Premier Zhou Enlai used White Rabbit candies as a gift to American president Richard Nixon when the latter visited China. The White Rabbit brand was transferred to the Guanshengyuan Group in November 1997.

See my post on candy for more details about the product, including its formulation.

Although the White Rabbit brand already had some history, its popularity worldwide has grown with the economy of China. Demand is increasing, especially during the Chinese New Year period, when many families provide White Rabbit sweets among other candies for visitors. The product generated a turnover of RMB 320 mln in 2013. The candies are now exported to more than forty countries and territories, including the United States, Europe and Singapore. On December 2, 2017, Wong’s Ice Cream of Toronto, Canada unveiled the first ice cream flavour made from White Rabbit Candy.

This association with ice cream has made Guanshengyuan to launch an ‘ice cream flavoured’ version of its candies. See my post on candy for more details on the formulation.

Starbucks is known for its attempts to grow roots in local markets by adding its own versions of local delicacies, like selling moon cakes for the Chinese Mid Autumn Festival. The company also occasionally serves White Rabbit Candy Frappe. According to a blogger, the it is made with two simple ingredients from Starbucks: Syrup Creme Frap and Brown Brown Butter Shortbread Sauce. If this is correct, Starbucks is only using the brand name and a picture of the original candies. The product itself seems unrelated to White Rabbit candy.

The brand is so attractive that it has been licensed to a number of cosmetics products. The first is White Rabbit Lip Balm, produced by Maxam. It is a limited-edition product and sold out in seconds on the online retailer, Tmall. The product has ingredients including essences of sweet almonds and olive. Shen Qinfeng from Guanshengyuan, stated in an interview: “How to make our brand younger, as well as adding nostalgia and emotion, is something we have been exploring.”

White Rabbit’s popularity in Singapore has given birth to a range of cosmetics, including shower cream and body lotion. While you could say that lip balm is still related to food, as you will gradually swallow it, these products are exclusively for external use. However, the background picture does include ice cream, so there is at least a subtle allusion to food. 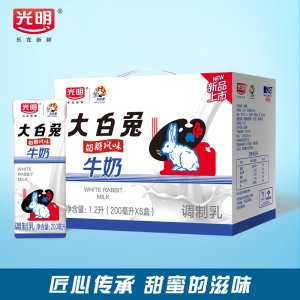 The most recent development is that Shanghai-based Bright Dairy launched a White Rabbit flavoured milk. The package tells us that this milk is ‘milk candy-flavoured’. It is like stating that a tangerine tastes like tangerine candy. White Rabbit Milk is the product of Chinese culture. It is the result of a strategic alliance of two major Shanghai-based companies, reflecting the strong regional chauvinism in Chinese culture (also see my post on the various food capitals in China). I have noted in several posts in this blog that the creamy flavour of milk is still not generally accepted in China. Shanghai could be the region in China with the highest acceptance of milk. Shanghai people often like to brag about their love for milk and dairy products. This is why China’s first milk candy was developed in that city in the first place. Now the success of the White Rabbit brand is used to create synergy with another old Shanghai dairy brand. It is not sure yet, whether White Rabbit Milk will be as successful as White Rabbit Candy or Bright Milk, but I will keep you abreast on this blog.

Following my post on shaji, I am writing one on another superfruit: goji berries. Goji berries are native to Asia, though some species of the plant can be found growing in North America. Goji berries belong to the nightshade family, which means that they are related to potatoes, tomatoes and eggplant. They have a long history of use in China. According to an early legend regarding the goji berry and its value, a doctor more than 2000 years ago visited a village that consisted mostly of centenarians. After observing them for a time, the doctor noticed that the residents who lived the longest also had homes closest to the wells were goji berry trees grew. As the fruits ripened, they would fall off into the water and their nutrients would be infused into it. Villagers who lived near the wells would drink the water and benefit from its nutrients. There are multiple variations of this legend. Documentation of the benefits of goji berries begins with a book written the mythical doctor Shen Nong in the year 250 BC, the oldest book on Traditional Chinese Medicine (TCM). Another important Chinese book written by Li Shizhen in the 16th century also includes important information on the subject of the goji berry.

Goji berries have become such an important crop in Ningxia, that Ningxia’s Science and Technology Department has developed a hand-held picking machine. In tests, the small machines can harvest 25 to 30 kilograms of goji per hour, with no more than 5% of the fruit damaged. It is 3 – 5 times more efficient than hand-picking. This link will lead you to a video demonstrating the machine.

Goji berries are known primarily for their nutritional value and health benefits. Some of the factors that make them famous for boosting health are:

Goji berries grow in a large area northwest China, but Ningxia is by far the largest producer. The following table shows the regional breakdown on the output of 2017 (dried berries).

As goji berries have been such a valuable earner of hard currency, the Chinese goji production has grown steadily during the past years, as is shown in the following table.

Although the demand on the world market is huge, the domestic demand is also substantial. After all, goji berries are a TCM, so have been used for ages. In fact, Western consumers got to know goji from China, like ginseng. The following table shows the export volumes of the same years as the production figures above.

Goji berries are no longer exclusively used in Chinese medicine. They have become an ingredient in a growing range of health foods and beverage. I will list a few in this section to give an impression of how goji is used by Chinese food technologists.

Also watch this video with examples of dishes with goji as an ingredient. 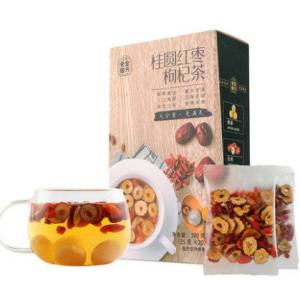 This herbal tea by Laojin Mofang consists of dried longan slices, dates and goji berries. It is a refreshing beverage that lasts a long time, as you can add boiling water a number of times.

Qiye Qing turns goji berries into a cloudy orange-colored bottled beverage. The ad uses the alternative name for goji: wolfberries. The drink is certified halal. The manager, Mr. He Jun, believes this move is a great opportunity to cash in on the Middle Eastern and Central Asian markets. The picture shows an ad of this beverage. See my post on Halal food for more details.

With the increased interested in healthier food, dried goji berries have become an interesting snack. Check out this small helping of goji by Qilixiang.

I may add more products in the future.