By now, the new motto of the Chinese government, the Belt and Road Initiative (BRI) aka One Belt One Road (OBOR), is known all over the world. Not only the national government, but also local governments in China, enterprises, and universities are rephrasing their goals and strategies in terms of OBOR. The Chinese food industry cannot escape this trend either, witness a conference held in October, 2018.

I have already posted a number of stories featuring wheat flour in this blog, including texts focusing on flour improvers, bread, and steamed bread (mantou). This is certainly not overkill. China has been the world’s largest importer of wheat for a number of years. The import volume in the 2015-16 season is estimated at 2 mln mt, an increase of almost a third compared to the previous season.

An important reason for that increase is the growing consumption of bread in China. Chinese domestic wheat is relatively low in gluten, which is fine for traditional Chinese products like steamed bread, dumplings or noodles. Bread, however, requires wheat with a higher gluten content. China used to import such wheat from Australia, the USA and Canada, but an emerging source of high gluten wheat for China is Kazakhstan. Chinese wheat imports from Kazakhstan increased from 40,000 mt in 2010 to 250,000 mt in 2014.

The fact that China and Kazakhstan are neighbours makes them more obvious trading partners than those faraway Western nations. However, the story is more complicated, more related products are involved, in particular another essential ingredient of bread: yeast. The favourite staple of Central Asia, the nan, is also a baked product using yeast.

Yeast feeds on molasses and Xinjiang, the Chinese border region with Kazakhstan, is an important sugar region in China with 14 sugar plants producing 250,000 mt of molasses p.a. Along the region’s Uighur majority, Xinjiang is also the home of a considerable Kazakh minority. Moreover, Kazakhs and Uighurs share the same Muslim religion, so there is a mutual understanding regarding Halal food regulations. This motivated China’s top yeast producer Angel (Yichang, Hubei) to establish a subsidiary in Yining, a city in Xinjiang close the border with Kazakhstan. A considerable part of the produce of that plant is exported to Kazakhstan. According to one source, ‘Chinese yeast is a famous in Kazakhstan as Coca Cola or Marlborough’. 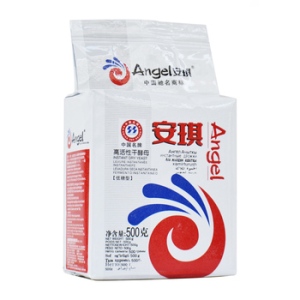 Meanwhile, China has started investing in the continuous supply of high gluten wheat from Kazakhstan through an intensive aid program. The country’s wheat output in 2011 was 26.9 mln mt, but was almost halved in the following year, due to severe drought. The average wheat output per hectare in Kazakhstan is about 1/5 of that in China. The Chinese authorities have organized a number of government agencies and companies to combine their expertise in helping Kazakhs to improve their wheat production. One tractor maker in Shandong has developed tractors specially geared to the conditions in Kazakhstan. Chinese experts believe that this development aid can unlock the potential of another 20 mln mt of high gluten wheat p.a. And yes, much of that will find its way to China.

Oil from Kazakhstan – from buying to producing

The Aiju Grain and Oil Industry Group (Xi’an, Shaanxi) imports cooking oil, wheat and flour from Kazakhstan. Aiju’s Chairman noted during his visit of a trade fair in Almaty in 2015 that a considerable acreage of rich arable land is left unused in Kazakhstan. Aiju is now building two factories in the region, which will process up to 1000 mt of wheat and 1000 mt of sunflower oil a day, as well as a base to plant wheat and sunflower seeds over 33 hectares. The base will be finished by 2020 and create 300 jobs. Aiju intends to bring high-efficiency planting and processing technologies to Kazakhstan, which will help with local economic development. The company also plans to start importing beef, mutton, honey and milk from Central Asia too. This includes other countries besides Kazakhstan. Bai Qinbin, deputy director of port management for the Xi’an International Trade and Logistics Park, said the city’s large transportation network can help boost trade and investment between China and countries involved in the Belt and Road Initiative. “We are working on starting a service between Xi’an to Teheran this year, as the Middle East is in great need of Chinese goods, especially food and commodities for daily use.” Xi’an is one of the most important multimodal infrastructure hubs in China.

The role of Xinjiang in the development of Kazakhstan’s food industry does not stop at wheat and yeast. Xinjiang is already the world’s largest supplier of tomato paste. One of these companies has invested in a tomato processing plant in Almaty. Chinese companies have so far offered to invest USD 1.9 bn to upgrade Kazakh food processing industry with 19 projects such as tomato, chicken and meat processing plants. According to Gulmira Isayeva, Kazakhstan’s deputy agriculture minister, Beijing’s USD 40 bn Silk Road Fund is planning investments in three projects, including one to move three tomato processing plants from China to Kazakhstan. Investments under consideration in Kazakhstan’s agriculture sector include USD 1.2 bn by Zhongfu Investment Group into oilseed processing; USD 200 mln into beef, lamb and horsemeat production by Rifa Investment; and USD 80 mln into the production of tomatoes and tomato paste by COFCO, China’s state agriculture conglomerate.

Yili (Huhhot, Inner Mongolia; aka China’s Dairy Capital) has broken into the ranks of the world’s top 10 dairy makers in 2016, ranking 8th. The company is advertising its global strategy in terms of OBOR. 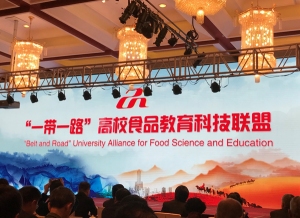 A founding ceremony of the  was held by Jiangnan University in Wuxi, East China’s Jiangsu province on Nov 16, 2018. Hong Liu, deputy director of the Jiangsu Provincial Department of Education, Liu Xia, deputy mayor of Wuxi, as well as presidents, experts and scholars from 49 universities in 27 countries involved in the Belt and Road Initiative (BRI) attended the ceremony (including the University of California, Davis (UC Davis), the University of Queensland, the University of Reading, Massey University and the National University of Singapore). During the ceremony, general secretary of the alliance, Liu Yuanfa announced the Taihu Lake Declaration, aiming to pool together the wisdom and strengths of the member universities to strengthen strategic communication and coordination in the food industry.

Shared Chinese and Kazakh interests in the agri-food industry

In May 2016, Gulmira Isayeva, Kazakhstan’s deputy agriculture minister, announced that Chinese companies were in talks to invest USD 1.9 billion in 19 agricultural projects as part of the BRI. According to a list of prospective investments that Isayeva showed to the Financial Times and statements from the project planners, agricultural investments under consideration include: USD 1.2 billion by Zhongfu Investment Group in oilseed processing; USD 200 million in beef, lamb, and horsemeat production by Rifa Investment; USD 80 million in the production of tomatoes and tomato paste by Chinese agriculture conglomerate COFCO and Evraziya Agroholding; and USD 58 million in a grain processing venture between China’s Aiji and Kazakhstan’s Total Imepx in northern Kazakhstan. Other projects include the establishment of feed lots and broiler poultry farms by CITIC and Kazakhstan’s Baiterek and an approximately USD 500 million investment by a finance group from Hong-Kong Oriental Patron in the development of “Kazexportastyk” for deep processing of agricultural products in Kazakhstan for export to the Chinese market.

In the future, Kazakhstan might also become a platform for certification and export of Central Asian agricultural products to China. According to Isayeva, laboratories are currently being established in the East Kazakhstan and Almaty oblasts. These labs will have technical equipment that meets the requirements of the General Administration of Quality Supervision, Inspection and Quarantine of China, a Chinese government body that will have the final say over whether or not to accredit enterprises. Using these laboratories, farmers from across Central Asia will be able to certify their products to be exported to China. China will trust the laboratory test results and will not re-examine the goods. Between December 14, 2015 and June 8, 2017, the Ministry of Agriculture of Kazakhstan and the General Administration of Quality Supervision, Inspection and Quarantine of China signed 6 protocols on phytosanitary requirements for export of wheat, horses, soy beans, wheat bran, honey, and the frozen meat of small cattle from Kazakhstan to China.

On July 11, 2017, Kazakhstan and China signed seven agreements worth a total of USD 160 mln at the Kazakh-Chinese Agriculture Investment Forum in Astana. Kazakhstan’s National Company Food Contract Corporation signed agreements with Xi’an Aijugrain & Oil Industry Group Co Ltd, Xinjiang Zhaofenghe Bio-technology Co., LTD, and Zhongxinjian LLC to supply 200,000 mt of grain and 100,000 mt of oil-producing crops to China, as well as construct a grain and oil-producing crops terminal at the Kazakh-Chinese border. Furthermore, Zhannur-Astana and Tianyang Yinhai Seed Co. agreed on the establishment of a seed cluster with a full grain processing cycle, including the transfer of advanced practices in seed production. The two countries also signed a memorandum of understanding aimed at the establishment of a model zone of agricultural cooperation on the basis of the National Agricultural Research and Education Centre, which will contribute to the establishment of joint processing plants and the introduction of new innovations in agricultural production.

Among the 65 BRI countries, 31 are Muslim countries, and Muslims account for more than half of the total population of BRI nations. Halal food is therefore an important factor in the relationship between BRI and the Chinese food industry. China has advanced technology and huge capacity to produce Halal food on a large scale, but this potential is far from being developed. In 2019, the world’s Halal food sales reached USD 3.2 trillion, while China’s export value was only USD 100 million. There are great opportunities for future development.