As food and culture are so intertwined, proper market research in the food industry should take account of the ways the local culture affects the segment of the food industry that is being surveyed. A good example is the post on Leisure Food earlier in this blog. In this post, I want to introduce the Chinese categorisation of meat products as used in the official publications about the domestic meat industry. I will list the main categories and for each category provide a concise description.

Before turning to the typology, let’s have a look at the Chinese meat market in general.  Traditionally, China’s meat of choice is pork, however recently there has been growth in more diverse meats, for example, veal.

China is now the world’s largest producer, consumer, and importer of meat. In 2019, the country consumed around 28% of the global meat supply, which accounts for 73% of the Asia-Pacific meat market value. In the same year, the monthly import of meat products in China reached USD 1 billion, with Brazil being the leading meat supplier whereas imports from the EU countries including Netherlands, Spain, and Germany growing the fastest. 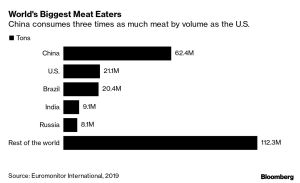 Fresh meat sales in China make up nearly 80% of the market value. Among all the types of meat, pork sales dominate the market, followed by poultry, beef. It is expected, however, that the Chinese beef and veal meat market will witness a rising demand, with the current per capita consumption rates increased by at least 25% in the next decade, whereas pork market growth will slow. The African Swine Fever epidemic in 2019 dealt an additional blow to domestic pork production. 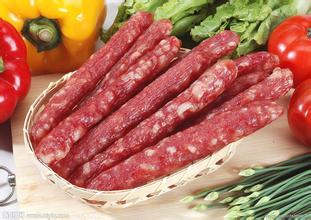 A number of research institutes and universities all over China are engaged in R&D to improve the production process of traditional Chinese fermented sausages. Aspects involved include: preventing the oxidation of fat, protecting the colour, enhancing the flavour using enzymes and specially desinged aromas, and decreasing the sodium level.

To learn about a novel type of sausage, date sausages, see my post on dates in this blog.

This is an umbrella term for a large variety of relatively small sausages that can be consumed as a snack. Chinese love to bring them on a trip, be it a one day tour to a local scenic spot, or a train trip of a couple of days. Although they count as a meat product, many ham sausages have a high starch content to make them soft enough for easy consumption on the road. For the same reason, they are usually relatively small and individually packed. 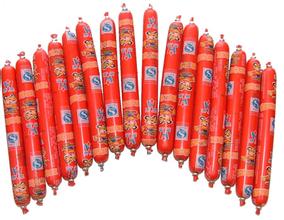 Ham in China is again more or less the same as ham elsewhere, made from the same part of the pig. One of my earlier posts is about one of China’s most famous types of ham: Jinhua Ham.

Cured meat products are typically more closely related to the local culture. People in different regions like different combinations of spices. In the case of China, soy sauce is a product often used in curing meat. Star aniseed is also a prominently present in many flavoured meat products from China.

This category has much in common with the previous one, the main difference being that the products in this category are boiled with spices, while cured meats are pickled and dried.

Cured meats are usually eaten a such, while sauce pickled products are dipped in a sauce when consumed.

These products are what the name says: smoked or roasted meat, again usually first pickled.

A very old way to preserve meat is to air or sun dry it. A special product in this category is:

Marinated pork or beef is roasted over a slow fire until dry and then shredded. Shred beef is used to flavour white rice, rice porridge and my other relatively bland staple foods. An example of such a food is shred meat flavoured bread introduced in my blog on public nutrition in China. 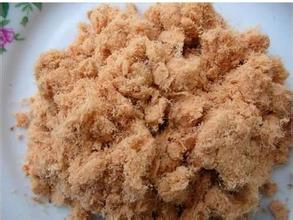 This is an umbrella term for meat prepared in various ways into semi-finished products. The consumer can transform them into ready to eat products with a minimum of effort.

Canned meat comes in two categories: hard cans (e.g. luncheon meat), what we are used to refer to as canned meat and soft cans, prepared meat packed in aluminum foil. The former has to be removed from the can for further preparation, while the latter can be prepared by boiling the pack in water.

The Western hamburger is undergoing interesting transformations in China to adapt better to the Chinese palate. It is easy to guess that McDonalds was the first channel through which the beef patty was introduced to China. Burger King followed later. Although very few Chinese dislike beef, when Chinese talk about ‘meat’ in general, without mentioning a particular animal, they are always referring to pork. Burger King is responding to by adding a pork-based hamburger to its product range in China. Their ad even uses the same pun that I included in the title of this post.

To still add some foreignness to the promotion, the text in the lower left corner says that the flavour is based on ‘German roast pork knuckle’. A genuine American European Chinese potpourri of flavours!