In our Western view of the world, cream cakes are very much a part of our culture, as the ideal accompaniment of a cup of coffee. The powerful synergy of caffeine and sugar gives a bitter sweet boost to body and mind.

Traditional Chinese pastry is different. Chinese have a sweet tooth as well, but cream is dairy and hence non-Chinese. Dairy products have found their way to China, witness a number of earlier posts in this blog, but it took a while before Chinese bakers starting producing cream cakes that can compare with the ones in a Konditorei in Vienna.

The largest Western style pastry chain in China has an ominous name: Holiland. The story of its foundation is unique as well. 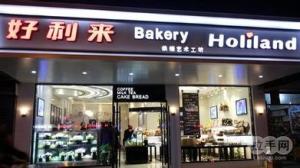 When the founder Luo Hong couldn’t find a decent cake for his mother’s birthday he made a rather extravagant gesture. The then 23-year-old bought a bakery to ensure the problem would never happen again.

That was 18 years ago. Now, at the age of 41, Luo is president of one of the largest bakery chains in China, and controls more than 1,000 cake shops in 70 cities including Beijing, Shanghai, Shenyang and Chengdu. They specialise in cakes, breads and other pastries and control 85.7% of the market.

This year the company is moving some stores from their original homes in the suburbs to downtown areas where the footfall is high enough to bring in even more customers.

Unlike other Chinese entrepreneurs whose names are often connected with their business, Luo is better known as a photographer, environmental campaigner and social activist.

He has spent most of his time during the last decade taking pictures and participating in charity events around the world, including the establishment of an environment protection fund for the UN Environmental Program.

Cake inspired by a photo
It’s Luo’s belief that if a company doesn’t have different brands to meet different customers’ demands, it cannot be successful.

A picture of a white swan taken in Cambridge is the inspiration for a new cake he intends to market later this year as part of his diversification into premium cake making.

Following on the success of the black swan series, white swan cakes will feature top-class decorations and accessories. The price will be between RMB 400 and 10,000, putting it into a class of its own. A cake weighing 1.5 is priced at RMB 469. At 21 cake, one of the most popular online cake shops, a cake weighing the same costs RMB 169 yuan. 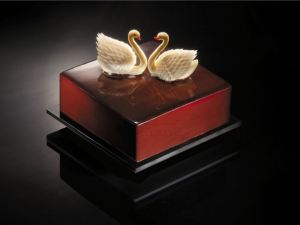 The wedding cake in the swan series will set customers back RMB 10,000. Fittingly, as part of the service, it will be delivered to the wedding ceremony by Rolls Royce free of charge.

“Cakes and photography are two parallel interests in my life. Sometimes they cross paths. The launch of swan cakes is a combination of my business and personal interests,” Luo said.

To make white swan cakes as exquisite as possible, Luo asked the developers to capture minute details from the queen of birds.

Luo is confident about the cake’s sale prospects and expects they will account for 50% of Holiland’s total annual revenues.

Photos as marketing tool
Luo says photography brings him happiness, inspiration for design and also a low-cost marketing strategy. Some of his photos adorn subway walls after the Beijing municipal government decided this year to improve the city’s culture environment.

“It’s good for our business,” Luo said. “People who talk about the swan pictures will also be curious about my swan cakes.”

Luo knows that in baking it is wise to follow produce what customers like best. One of his products featured a bear decoration but he got rid of it because some of his friends in the finance industry said it brought back unhappy memories of the bear market during the financial crisis last year.

As one of the largest cake shop chains, Holiland also faces the problem of “brain drain”. The high turnover of skilled employees means that Holiland is always in danger of losing key intellectual capital in its core competency areas. The company needs to develop knowledge management strategies to capture, share, and preserve knowledge and integrate knowledge management into its strategic plans, said Luo.

This year, the entrepreneur paid RMB 5 million to American leadership expert, John C. Maxwell, to give a speech about leadership to all employees at Holiland on July 28 and 29 to improve the management skills of his employees.

Online business
Today’s hurried urban life and the convenience of the Internet are luring more customers to online businesses, including bakeries, in China.

Luo and his team have joined the trend. All swan cakes are only accessible to online shoppers. The savings will be used to improve the product. It will come with a steel knife and fork rather than less environmentally-friendly plastic used previously.

Other bakery shops have also found that doing business online is less time-consuming and more economical. E-beecake, 21 cake and Waffleboy are among those becoming more popular with young people. 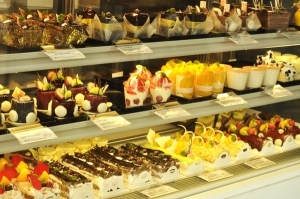 Other traditional chains are also challenging Holiland’s market position. Beijing-based Weiduomei is diversifying its business by opening three cafes and two Western-style restaurants. Baoshifu (Chef Bao), a popular pastry chain established by a man named Bao originating from Jiangxi, has made name for its shred meat buns, but also carries a broad range of pastries and breads. Bread Talk is focusing on gaining a foothold in high-end shopping malls and office buildings, reinforcing its niche image. Luo says: “Competition is good for the development of the cake market, which still has great potential.”

Holiland is also expanding its portfolio of delicacies to include mooncakes and sweet dumplings. This autumn, the company will introduce a greater variety of mooncakes to attract more high-end customers. Holiland sold as much as RMB 200 million of mooncakes every year in China. According to Xie Li, general manager of Holiland, regular cakes, mooncakes and sweet dumpling are Holiland’s best sellers, accounting for 60, 20 and 10% of the company’s revenues respectively.

Holiland tries to link up with current trends. A great example is the marketing of its ‘drinkable cakes’ launched late 2020. These chestnut and cheese cake flavoured beverages are based on Western flavours, but the marketing is done in traditional Chinese style. 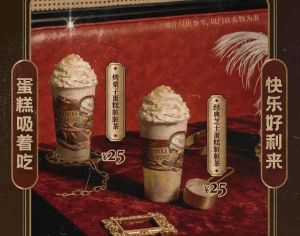 Another way Holiland links up with the Chinese tradition is launching a series of soy milk based cheese cakes late 2020. These are more acceptable to the many Chinese consumers that still have a problem with the creamy flavour of milk. 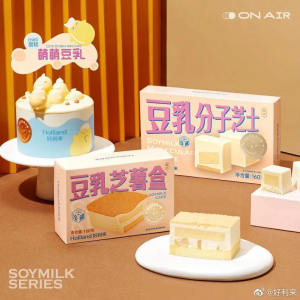 Brand name with a double meaning (?)

Readers with knowledge of Chinese may notice that this brand name has a double meaning. The Chinese name Haolilai literally means ‘good profit coming’, but the pronuciation resembles haolaiwu ‘Hollywood’. The English name Holiland is obviously inspired by Holy Land. The allusion to the world’s movie capital will attract Chinese consumers’ attention, while Westerners will want to check out a chain linked to the Holy Land. Luo Hong has never explained his choice of brand names, but I am sure the above is more than a conjecture.

1 thought on “Discovering the Holiland . . . in China”