In Western households, canned food is kept for when you have little time to prepare a meal. In China it is regarded as a luxury food

A major production and export country

The canned food industry is one of China’s earliest food industries with a good foundation and fast development. The above photo was taken in 1957. As the opening text of this post already states, canned food used to be regarded as a luxury product. As a result, canned food was mainly positioned as export product. And indeed, those exports have made a great contribution in generating hard currency over the decades. China has been able to stay in the ranks as a processor and exporter of canned food such as tomatoes, asparagus, bamboo shoots, yellow peach, orange, etc. The world’s largest canned food producers are also located in China.

The following table shows that the Chinese canned food industry has seen a turbulent development since China opened up its economy in the late 1970s.

This table shows that the industry first grew through an increasing number of companies, followed by a period in which the worst performers had to leave the business, while the best performers grew in size.

Where are the canneries?

Canned food is produced all over China and food is usually canned near the place where the fruits and vegetables are grown and the animals are raised. E.g., Zhejiang province has been the largest export region for canned tangerines for decades. The top region is Fujian province and Zhangzhou in particular. In a previous post I already reported that Zhangzhou is often mentioned as the ‘Capital of Canned Food’ in China. A top product in this respect is canned mushrooms. 80% of the canned mushrooms exported from China leave the country via Zhangzhou. The above map shows the location of canneries in various regions of China in 2012. 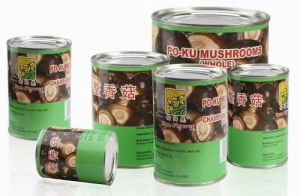 The canned food market in China is not plain sailing. Especially in recent years, with the increasing concern for healthy food among Chinese consumers, the image of canned food has suffered due to the long shelf life, adding preservatives and other misunderstandings, but the industry as a whole has so far withstood the test. At present, China’s canned food consumption level is still very low with only 6 kg per capita while the consumption is at 92 kg in the United States, 56 kg for the EU, and 30 kg for Japan.

China’s canned food industry is coping with problems of overcapacity, disorderly competition, unfortunate product structure and lack of innovation, while there is a huge potential market to be stimulated.  In recent years, the international market competitiveness has declined as the cost has been rising. Especially adjusting the product structure has become a priority. In fact, the changing lifestyle of the younger generation, with a busier pace of life, is posing a new market opportunity for the canned food industry in China. To cash in on that, innovation is imperative.

As is emerging from several posts in this blog, associations are a strong influencing factor in the Chinese food industry. This also applies to the China Canned Food Industry Association (CCFIA). Established in Aug. 28, 1995, the CCFIA is the only national wide legal organization entrusted by the Chinese Government. Its members include canned food producing enterprises, sale companies, research, inspecting, detecting units, equipment manufacturers, raw material providing companies and management departments and units. The CCFIA is the representative of the common interests of the members. Its aim is to promote the development in canned food industry in China and provide high quality services to all the members.

8 thoughts on “Canned food – a luxury item in China”