Saqima is a kind of pastry adored by Manchu people of northeast China. They were originally made for sacrificial offerings. After the imperial court of the Qing Dynasty (the emperors of that dynasty were from the Manchu nationality) moved its capital to Beijing, a large number of Manchus settled in this city. This facilitated the spread of Saqima among Han Chinese. it soon became recognised as a Beijing treat and currently as a general Chinese pastry. It is available in China supermarkets in every part of the world with a considerable Chinese community.

The basic recipe is as follows: first mix the flour and egg into noodles, fry them and then blend them with sugar syrup. The next step is to put the sweetened noodles in moulds to form a big block, which is then cut into small square or oblong pieces. Proper saqima taste sweet but not greasy, and should be crisp.

As all traditional Chinese foods, saqima need to go through the process of adaptation to industrial production, to survive in the modern consumption environment. Points for attention for food formulators are: the crispy mouth feel and the flavour and fragrance that should be rich but not greasy. This video shows an industrial production line for saqima.

Hsu Fu Chi (already featuring in a number of other posts in this blog; use the search function to surf to those posts) is one of the more important industrial producers of saqima. Nestlé has a 60% stake in this company and has assisted in developing a recipe and process to increase crispiness in Saqima to draw in younger consumers. The new recipe comprises fried dough, syrup and ﬂavorings – the latter of which could be anything from cheese, seaweed, mango or chocolate. Importantly, it said the fried dough should represent 55-72 wt% (percentage of total product weight); syrup 22-35wt% and ﬂavoring 1.5-5.5wt%. The fried dough is made using high gluten ﬂour and baking powder as a leavening agent and the syrup using brown sugar, sweeteners or a mix. The ﬁnal syrup has to be made using certain ratios – sugar (10-25wt%); 65-80wt% glucose syrup; 0.21wt% salt and 5 – 12% water.

This is a picture of one of the packaging and the ingredients list as provided by the manufacturer.

Other innovative producers sometimes add currents or preserved fruit pieces before pressing the blocks to create more variety in flavours and textures. The pictures shows a saqima made from black rice and also containing peanuts.

In another post of this blog tea as flavouring I am introducing a tea flavoured saqima.

One sign of the maturation of the industrial production of saqima is that a number of food ingredients producers have started developing products specially formulated for this application. One Chinese enzyme producer is marketing a compound enzyme to improve flour for the production of saqima, improving the crispiness of that first bite that is so defining for a good old fashioned (though industrially produced) saqima.

A number of flour mills are supplying wheat flour with a high gluten content for saqima producers. 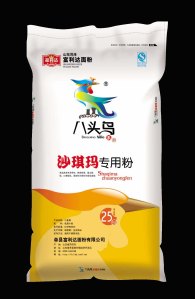