Rice wine is the oldest alcoholic beverage in China and therefore probably one of the oldest in history. Chinese records mention a gift of rice wine to an emperor as early as 4000 years ago, and up to the 15th Century, rice wine was still the main alcoholic drink in China.

Rice wine is also using in cooking. Using wine for the blending of flavour is also a great invention of Chinese cuisine. Wine not only kills the rank stench of fish and meats, it can also produce a real appetizing aroma. When making stir-fries, adding a little cooking wine can bring out the delicious aroma of the food within the evaporating wine; the texture of the meat is melt-in-your-mouth tenderness.

The traditional production process was cumbersome. The yield of wine from raw materials was relatively low and it was difficult to obtain a clear liquid. Until far in the 20th Century, rice wine was known as a sweet brownish red turbid liquid, hence the Chinese name huangjiu, ‘brown wine’. It was consumed like the Japanese sake: heated au bain marie. There also is a transparent white rice wine produced from glutinous rice called mijiu (literall: ‘rice wine’). 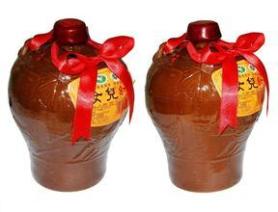 It was brewed and sold in ceramic pots, even long after glass bottles had been introduced in China. Such packaging hides the turbidity. A glass bottle with a turbid liquid, or with a layer of sediment at the bottom, is does not look good on the shelves of a wine shop.

Here is a video introducing the production process. It is part of a course in Chinese, so it teaches you a number of relevant expressions while enjoying the brewing process.

Rice wine is used as an ingredient in various traditional foods, like fermented beancurd or furu.

In the course of the past century, traditional Chinese distilled liquor, baijiu, started to lure away a considerable part of the traditional consumers of rice wine. On the other hand, foreign beverages like beer and wine started to be produced in China as well. These initiatives were first made by foreign investors for the expatriate community, but the more affluent Chinese consumers started drinking them too, to show that they were adopting a Western life style.

Rice wine remained an important drink only in the Yangtze River Delta, roughly the triangle formed by the three major cities in that region: Shanghai, Nanjing and Hangzhou. It has been made famous by the writer Lu Xun (1881 – 1936) in his short story Kong Yiji. That story positions rice wine as the drink for workers and elderly men.

Our blog on China’s top food brands of 2014 shows that those brands include a number of distillers brewers and wineries, but no rice wine brands.

While rice wine had been almost completely written off by the Chinese alcoholic beverage industry, the product suddenly started a revival in the late 1990s. A number of the traditional brands began modernising the production process to make rice wine that appealed more to the modern consumers: a clear wine that was more thoroughly fermented and therefore had a fresher taste. This fresher product could also be drunk at room temperature. The China Institute of Food Science & Technology has established a special branch for rice wine on March 18, 2014. This should be seen as an important step further in the modernisation of this traditional beverage. The following table shows the production figures from 2015 to 2018.

New producers sprung up in various parts of China. One even launched a ‘dry rice wine’.

Sanyou Group (Heyuan, Guangdong) has started the construction of a new rice wine plant with an official ceremony early December 2014. Heyuan is located in the heartland of the Hakka people and Sanyou intends to embed this new plant in the traditional Hakka culture to create a unique image for its rice wine.

Jiuzhiling Distillery (Nanchang, Jiangxi) has developed an ‘ecological’ rice wine. It is made from unpolluted rice and brewed with such precision, that it is a clear white liquid without leaving sediments on the bottom of the bottle like the traditional rice wines do.

Young Chinese consumers have been rediscovering rice wine during recent years, though they seem to prefer the transparent mijiu. The best-selling brand in this segment is Huatian Xiangzi. Huatian Xiangzi was founded in 2013 by Fan Yu of Xi’an, after spending several years trying to come up with an ideally flavoured rice wine. It sells well on Taobao; the value of those sales on the platform was RMB 5 mln last year  Apart from selling Huatian Xiangzi online, Fan says, he is selling it to outlets of the Metro chain all over China. 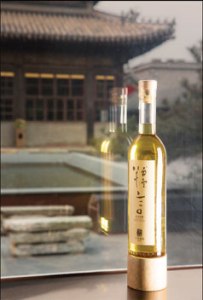 Another favourite rice wine brand is Nuoyan, founded in 2014 by Huang Yu, a winemaker and designer. It comes in original and sparkling versions. After 3 years’ development, Huang has created 13 rice wines and a boutique winery in Fujian province, together with two wine shops in Beijing. His aim is to redefine Chinese rice wine and he has poured more than RMB 10 mln into developing rice wine products, each taking him an average of three years. He believes that Chinese wine should have a new representative, and rice wine should be it.

Mikwine has launched a range of fruit-flavoured sparkling rice wines under the Mike brand in 2020. Flavours include organge white tea and lychee black tea.