If there is one Chinese dish, or better: eating experience, that virtually all foreigners who have been to China enjoy, it is hot pot. The most traditional version is what Chinese refer to as shuan yangrou, literally ‘dipping mutton’. Eaters dip thinly sliced mutton in a boiling broth in the middle of the table, then dip it in a sauce with sesame paste as its base and other flavourings added on the basis of personal preference. While mutton is the main ingredient, various vegetables, bean curd, mushrooms, etc., can be dipped as well. This used to be winter favourite for the northern Chinese, as it is a way of eating that warms you up inside and outside. I hold dear memories of hot pot from my first winter in Beijing in 1975.

The consumption of hot pot increased with the growing spending power of Chinese consumers. This heightened interest caused a number of changes, adapting to the higher variation of likings of the patrons, also incorporating new technologies. Apart from mutton, beef and other types of meat were added. The charcoal as a source of heat was gradually changed to alcohol gel, which is considerably less smelly, and later electricity.

The traditional northern hot pot also got influenced by the southern type. Southern Chinese have a different concept of hot pot. They throw about everything edible in a pot and fish it out using small metal nets. The Chongqing version uses a very spicy broth. Southern hot pot includes meat, but it is not the core ingredient. Most private restaurateurs who set up hot pot restaurants could not afford to stick to the shuan yangrou tradition and name there cuisine literally huoguo ‘hot pot’ (literally: ‘fire pot’). Hot pot gradually became an equivalent of a way of communal eating that required little effort. At home, you just placed a pan of broth on an induction plate, surrounded with plates with various raw ingredients. The same applied to hot pot restaurants, where the main activity in the kitchen was slicing meat and vegetables.

A new development in the Chinese convenience food market is the appearance of self-heating noodles, congee, etc. Instant hot pots appeared soon afterwards. The photo shows a typical Chongqing hot pot with a spicy and non-spicy section by Qingxixi, launched in 2021. Qingxixi promotes the product as only containing zero fat or low fat ingredients.

Probably also aided by the renewed interest in home cooking caused by COVID-19, the hot pot rage has recently created an complete new market for packed hot pot ingredients. Hot pot chains like Haodilao started this by selling ready-to-use blocks of hot pot condiments. You simply melted it in hot water and you had an instant dipping broth. Meat processors followed suit by launching packed sliced mutton and beef. Fish followed soon. Chopped and sliced vegetables also appeared on the shelves of Chinese supermarkets. A recent study estimates the value of the market for hot pot meat alone at RMB 30 billion. The same study estimates the value of market for hot pot condiments at RMB 49 billion. A Chinese netizen posted the following photo of the various products he had purchased for a hot pot meal at his home with a few friends.

As you can see, it includes drinks and a cake for dessert. The only fresh ingredient is a plate of vegetables at the top of the photo.

So, is this a good development, all that packed food, or is it against the trend towards healthier eating? As far as the meat is concerned, I know from personal experience that the appearance of frozen pre-sliced mutton and beef felt as a liberation from slicing it yourself. Apart from being sliced/chopped and packed, these products have not been heavily processed. Fact is that ‘hot pot materials’ have become a sub-market of their own in China. I will keep you abreast of further developments on this page

Eurasia Consult Consulting can help you embed your business in Chinese society.Peter Peverelli is active in and with China since 1975 and regularly travels to the remotest corners of that vast nation. He is a co-author of a major book introducing the cultural drivers behind China’s economic success

Temperatures are rising rapidly in China and that is traditionally the signal for the ice cream industry to increase production. However, ice cream is one of the products the consumption of which has increased dramatically in the first quarter of 2020, when virtually all Chinese were confined to their homes with only very limited opportunities to go out. Convenient foods like instant noodles and snack food like nuts and seeds reported year-on-year increases up to more than 100%. The increase in ice cream consumption was less spectacular, but still 20% – 30%.

However, the most interesting development in the Chinese ice cream scene is not just the increase in consumption, but the growing interest in savoury flavours. Until recently, ice cream was typically a sweet to very sweet treat. Now, the most peculiar flavoured ice creams are appearing all over the country. Can you imagine enjoying scoop after delicious scoop of ice cream laced with: seaweed, shredded meat, onion rings, etc.? Curious? Go to China this summer to try them out, one by one. This development is so sudden and overwhelming, that I am not adding this news to my earlier post on ice cream, but dedicating a special post to it. This will not be a show window of who makes what. As usual, I will give you a good look into what is happening in this market.

I have introduced shred meat or meat floss in an earlier post on Chinese meat products. I already noted there that it can be used as an ingredient in various foods. Here it is combined with chopped spring onions. If you can keep the taste of fresh spring onions, this combination might actually work very well with a suitable ice cream flavour.

As noted in my post on Chinese drinks, I introduced herbal tea (often referred to as ice tea in Chinese) as a type of beverage derived from traditional Chinese medicine (TCM). It has become extremely popular in China during recent years, so why not make it into a popsicle? The design of the packaging reflects the ‘traditional’ nature of this product. 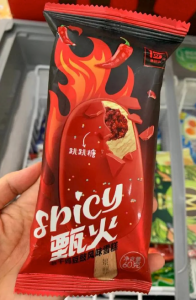 After my introduction, you undoubtedly expect a chili flavoured variety, so here it is. The packaging promises a lot of fire. I like chili chocolate (the mild type), so I expect to like this too. 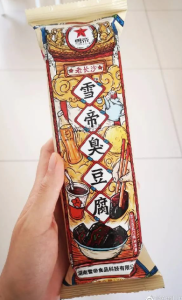 Toufu, bean curd, is known very well in the Western world, as a versatile food ingredient and an alternative to meat. Stinky toufu doesn’t sound very nice, but refers to a kind of black fermented toufu that is fried and sold as a snack at street stalls in various parts of China. A traditional hot snack in winter is now also available as a cold snack in summer.

The last, but most spectacular, type that I want to introduce in this post is hot pot ice cream. Chinese love to eat hot pot, at home and in restaurants. You can throw almost any food in the boiling water, retrieve it when done, dip it in a sauce, and savour it. This ice cream comes in a pot, with a wafer a the lid, and laced with chopped vegetables and seaweed, topped with a layer of shred meat.

There are more types and undoubtedly even more will appear. I may add the ones that I find most striking later.

There are different Chinese expressions for people who love food in Chinese (as there are in English). A classic, more highbrow, term is meishijia, literally: ‘a person knowledgeable of good food’. This term is close to the English concept of gourmet. People like this do cook, but prefer to indulge in the better restaurants. The not only have good taste, but also do not lack of cash to fund their likings. In recent years, the term chihuo has become popular. It literally means ‘eat merchandise’. As I prefer an English translation over keeping a Chinese word untranslated, I will use the equally popular English term ‘foodie’ as the, more or less, equivalent for chihuo.

Like Western foodies, their Chinese counterparts do not just like to eat because they crave food, but because they have an interest in new flavours and textures, foods that are linked to things that are fashionable in other sectors of life, like art. They are focused on convenience and leisure foods, but although do not necessarily reject junk food, they are especially interested in novel foods that are ready to eat or at least easy to prepare, but are also healthier than the traditional street food. Attractive packaging is also valued.

Chinese foodies can be unexpectedly traditional in their taste. In many posts of this blog, I have mentioned the special status attached to imported food, which often has a special section in the larger Chinese supermarkets. The novel foods that Chinese food bloggers introduce are often improved, i.e. better packed, more nutritious, versions of traditional Chinese foods. In fact, you can get a good impression of what Chinese foodies like by surfing to the Trends page of my blog. All items introduced there have been taken from the accounts of Chinese food bloggers.

That page is serviced irregularly. I post a product that strikes me as interesting.  Recently (12/3/2020), Tmall, one of China’s leading online shops, has published a Top 20 Products like most by chihuo. I will share that list with you here, with a short explanation of each item. It will give you a valuable insight in what Chinese foods buy online now. The only point for attention in interpreting this list is the possible influence of the corona virus epidemic on this list. I will take it for granted here. Whenever Tmall publishes an update, we will be able to compare the new list with the one introduced here.

Well, this is the Top 20 most popular food products purchased from Tmall mid March, 2020. I will refrain from guesses and inferences about what it could mean for suppliers who want to cash in on this reasonably affluent segment of the Chinese market. Most of them will be able to make that step and Eurasia Consult is always there to help out.