Earlier in this blog I posted an item about leisure food, a typical food group in Chinese food industry statistics. This is a very broad range of foods that Chinese eat while on holiday, sitting in their favourite chair in front of the TV, in the stadium watching their team play, and virtually all other occasions that they are not eating a proper meal.

The Chinese do have their own traditional snacks, which is a subset of the leisure foods. In the light of the over general nationalist trend in China after President Xi and his new crew rose to power, Chinese are also getting more aware of ‘their own’ traditional snacks.

However, the same applies to those snack foods as I reported earlier about a food like instant noodles, or steamed bread (mantou): they need to be packed in pocket-sized easy to carry and ready to eat portions, while preserving the original texture, taste and flavour.

That is a major challenge for the Chinese food R&D community, but it is worth the effort. The production of traditional Chinese snack food has increased from approximately 1.93 million mt in 2004 to almost 3.88 million mt in 2014. The market value rose from RMB 54.008 billion to RMB 387.532 billion.

In the remainder of this post, I will list the categories of traditional Chinese snack food as usual distinguished in Chinese statistics.

Nuts, seeds and other roasted goods

Nuts do not need further explanation. Roasted goods (chaohuo) are melon seeds, pine seeds, peanuts, and other plant seeds that are roasted to increase flavour and digestibility. The value of this market segment rose from RMB 18.592 in 2004 to RMB 86.393 billion in 2014.

An interesting company to watch in this business is Three Squirrels (Sanzhisongshu). Three Squirrels is the pin-up kid in China’s snacking segment. Launching in 2012, it took just 65 days to become the top nut seller on Tmall and today it’s China’s best-selling food brand online. The company’s turnover has grown from RMB 924.473 mln in 2014, RMB and 2.043 bln in 2015 to RMB 4.42 bln in 2016. Most of this success is due to its online sales and its vast network of region distribution centres. It has achieved this all while charging a premium above most of its competitors.

Three Squirrels plays to Chinese consumers’ love of cute furry animals by cleverly incorporating its cartoon mascots into everything it does, from branding to customer service. Images and videos of the squirrels attract engagement rates far beyond most of its competitors online. It has created an army of advocates who earn social credit filling their WeChat feeds with images of their mascots, selfies with their products and even positive experiences with customer care. Three Squirrels also transforms consumption into an experience providing nutcrackers and a suite of other add-ons.

The latest stunt by Three Squirrels is linking up with Monlot, a Bordeau-based vinyard acquired by the Chinese movie star Vicky Zhao. Check out this picture of Monlot Three Squirrels. It is an interesting ruse to embed a Chinese-owned foreign vinyard in the local food industry.

Some nuts are assigned medicinal qualities in traditional Chinese medicine. An example is the wild almond (Semen Armeniacae Vulgaris; ‘shanxingren (mountain almond)’ in Chinese). They are said to have antipyretic functions and help bowel movements. A noted producer of wild almonds is Fangxu Food (Beijing). 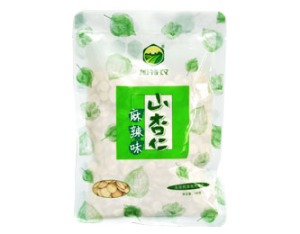 I already dedicated a post one of them: huamei. Preserved fruits fall under foods that have been invented in times that there was no cooled storage or other way to preserve fruits. They have become part of the local diet particularly in North China, with its cold winters. The northern preserved fruits are drier; those in south stickier. The value of this market segment rose from RMB 17.014 billion in 2004 to RMB 105.066 billion in 2014.

The top product in this group is beef jerky, although shredded pork (rousong) could be almost as big. The latest invention in this range is a series of duck products (tongues, feed, necks, gizzards, hearts) that I introduced in my post on Peking Duck. The value of this market segment rose from RMB 7.763 billion in 2004 to RMB 45.289 billion in 2014.

Chinese love to chew on all kinds of dried and roasted beans, so it has become a separate category of snack foods. The most famous are the fennel flavoured beans (huixiangdou) that have been eternalised by Lu Xun’s short story Kong Yiji. They are small green soy beans toasted with cinnamon, fennel and other spices. On the basis of huixiangdou, a Shanghai shopkeeper invented a new variety called wuxiangdou ‘five spice beans’. They are broad beans with a firmer texture, a white skin, and white pulp. They are roasted with five ingredients: fennel, citrus, cinnamon, sugar and essence, to reach a unique mix of flavours. The value of this market segment rose from RMB 5.890 billion in 2004 to RMB 46.204 billion in 2014.

The bulk of the remaining traditional snacks are dried or wet pickled or preserved vegetables. The typical way to preserve vegetables is by fermentation. An example, zhacai, has been introduced in an earlier post. 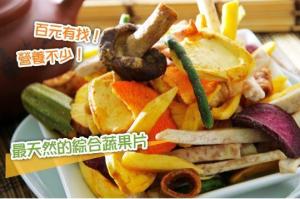