The life of a farmer is not usually regarded in terms of wealth creation. Even though farmers can be regarded as mankind’s first entrepreneurs, tilling the soil and tending to plants seven days a week until fruits or vegetables can be harvested is hard work that rarely leads to high profits. However, trading traditional crops for plants with a higher added value can mean a lot for a poor farmer or backward farming region. This applies even more to many of China’s national minorities.

Most ethnic minorities in China inhabit the less fertile regions, like deserts, or mountains whose slopes are not easy to tend. Farmers in those regions have been living on the verge of poverty for generations. The governments of various levels have been generous in providing all kind of subsidies or aid to alleviate the worst problems, but these measures are often more like a medicine to battle the symptoms, rather than a cure for the disease.

Fortunately, a number of minority farmers with an entrepreneurial spirit have taken the initiative to learn about more interesting crops and techniques to grow them on their own land. One such farmer-entrepreneur is Mr. Wang Minggang. In modern Chinese parlance, Mr Wang is a ‘rural migrant worker returned to the countryside (fanxiang chuangye nongmingong)’. He went to the big city at an early age to find his fortune. However, he found something much more valuable: techniques to make a fortune for himself and his fellow villagers. He learned about grape growing and developed the idea to grow grapes in his home region, Pengshui county of Chongqing, a minority region inhabited by Miao and Tujia people. Although Pengshui’s soil is fertile, it is a mountainous region that until recently was a few days travelling away from the nearest city. The government has greatly improved Pengshui’s accessibility by building an impressive web of roads, but that did not provide the minority farmers with a higher income.

Wang Minggang started growing grapes and strawberries in his home region, the Ayi River Region of Pengshui. However, his own plot was insufficient to yield a substantial crop. He then proposed to all his neighbours to lease their land, thus increasing his vineyard considerably. In that way, his fellow villagers had a steady income and he could reach a profitable volume.

Another great idea was to start growing ecologically from the beginning. Biological fruits can be sold for a higher price, now that the urban Chinese are starting to recognise biological produce. Wang had some problems with adapting the things he had learned in northern China to the climate of his home region, but now the grapes are hanging proudly on the vines, when the harvest time is nearing. I personally visited Boxi Vineyard on September 27. The grapes were already gone, but the sight of the vines was impressive. 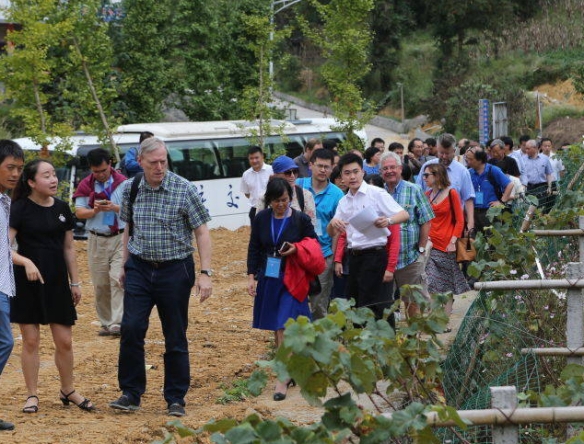 Many villagers rebuilt their homes, adding guest rooms that can be rented to city people who like to experience rural life for a few days. Those that choose the Ayi River Area at the time the grapes are ripe can pick a certain quantity of grapes themselves and take them home. While having fun, those urbanites can get an idea how the fruits that only knew from the way they were sold in supermarkets are actually grown by the farmers. Even though the project is still relatively young, its effect on the villagers’ lives is evident.

An interesting side effect of this enterprise is that it has introduced crops to the Pengshui region that have never been grown there before. It has contributed to the biodiversity of the region. This story so interesting, that I will post of more these stories on this blog.