Food brands inspired by the name of their home region is easy to grasp. When a local product starts being promoted elsewhere, branding it with the name of a famous city or region of origin can help push the brand name quicker than when a completely new brand name is forged.

Some of those brand names become so common, that the average consumer gradually forgets that it is a geographic name. Good examples are Worcester sauce or Dijon mustard.

The reversed situation, regions being named after their most famous food or drink, is much rarer.

Chinese local governments, in particular cities, have discovered the power of local foods in increasing the (inter)national awareness of their home region. 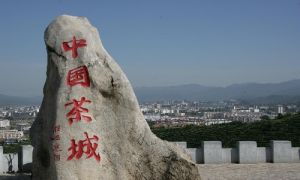 In an earlier post, I introduced how Pu’er tea has been so important for its home region in Yunnan province, that the central city in that region decided to change its name from Simao to Pu’er. The text on the stele in the picture says ‘China’s city of tea’. 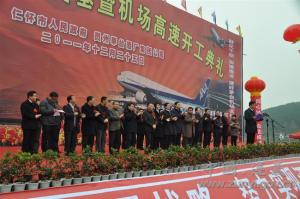 The Wuliangye Group, the producer of Chinese most famous type of baijiu, made headlines a few years ago by proposing to change the name of the airport of its home town of Yibin to Wuliangye Airport. This has so far remained an idea.

Its competitor Maotai Group in Guizhou has been more successful. Renhuai county will soon open its Maotai Airport. The picture shows the ceremony celebrating the start of the construction.

Let’s hope that the pilots departing from it will not sample too much of this local specialty.

This post is still relatively short, but I intend to add examples as they occur.