A survey was held among Chinese food and beverage manufacturers about the way they purchased their ingredients in 2006. Although these figures are not very recent, they reflect habits that are not affected by sudden changes like fashions. We therefore regard them as a reliable reflection of the current situation.

Companies’ buyers were asked to indicate how many times a year they order food ingredients. 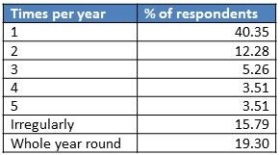 These figures corroborate the general perception in the market that Chinese users of food ingredients tend to place their orders once per year.

The following table indicates the month of the year in which respondents prefer to place orders for food ingredients.

This table shows four peaks, with (late) March as the top period. Smaller peaks are located at late April/early May, late August/early September and late October/early November. Soft drinks and ice cream are the largest consumers of food ingredients in China. Those manufacturers start preparing for the summer season late March, which explains why the top peak in ordering takes place at that time of the year.

Looking at existing events, we see that Food Ingredients China (FIC) has selected the top slot. SIAL China and Bakery China have a slightly less favourable position in May, and are competing for more or less the same clients. FiAC is held at the annual low.

This does not say anything about the quality of the shows, but for foreign suppliers of food ingredients, FIC still offers the highest probability of meeting eager buyers.

Any party with an idea to start yet another trade fair in this business in China should aim at the Oct/Nov slot, which is still open.