Chinese steamed bread is a fermented wheat flour product that is cooked by steaming. It is big business. Insiders claim that steamed bread is good for approximately 60% of the total flour consumption in Northern China and 20% – 30% in Southern China.

Mantou can be eaten alongside dishes, or dipped in various sauces (like furu, a type of fermented bean curd). Stale mantou are often fried, as a whole or in slices. 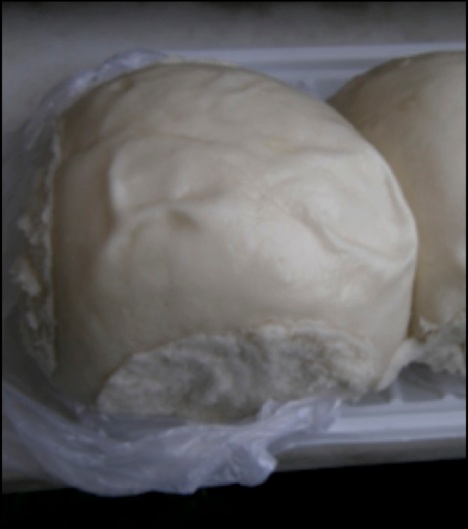 The preparation process is similar to that of western-style bread, but the final product is steamed, not baked in an oven, so there are some differences in appearance and shape. Steamed bread is white and has a soft, shiny surface. The common types of steamed bread weight about 30 – 120 gr.

You can find a video about mantou making here.

This basic recipe can be varied by adding a number of ingredients: soy flour, milk powder, colorants, etc.

A major trend is the beginning of industrial production of steamed bread. Until recently, steamed bread was made exclusively at home. With increase of the pace of life in urban China, Chinese city dwellers spend less and less time in the kitchen and cumbersome processes like preparing steamed bread are the first to be ‘outsourced’ to professionals, like local cooking shops or workshop like factories that sell their products to street vendors and local shops.

There are even machines that can produce mantou in a continuous process. 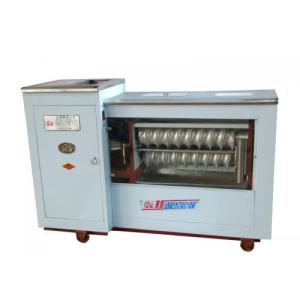 Here is a video showing the industrial production of mantou.

A tough technical and logistic problem for companies in developing steamed bread production on a national scale is that it is difficult to keep fresh during long storage and transportation. Major steamed bread producers have appeared in many Chinese cities during recent years (e.g. Sanshui Food in Beijing, Zhengrong in Zhengzhou (Henan) and Ganqishi in Hangzhou (Zhejiang)), but these mainly supply outlets in their own home region. 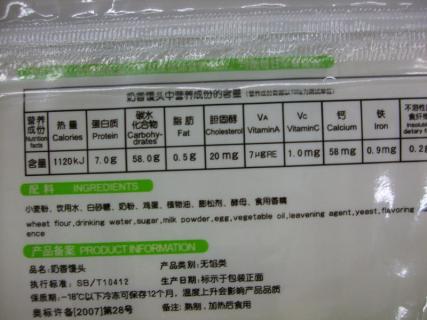 A logistic problem for companies in developing steamed bread production on a national scale is that it is difficult to keep fresh during long storage and transportation. Major steamed bread producers have appeared in many Chinese cities during recent years, but these mainly supply outlets in their own home region.

Some Chinese nutrition professionals are promoting mantou as a health snack food, because it is low in salt, sugar and fat. They definitely have a point, as long as you eat them fresh. Due to their high water content, mantou are an attractive medium for the aspergillus flavus mold that produces the carcinogen aflatoxin.

Industrial production of mantou is still in its infancy, but the R&D in this topic has already led to the appearance of specially formulated steamed bread improvers. As these improvers include enzymes, this is one of core trends to be monitored by suppliers of enzymes. Enzymes used in various commercial products (also see my blog on dumplings) are: a-amylase, hemicellulase (xylanase), lipase and glucose-oxidase for improving the dough handling properties and a larger volume yield. A Chinese food technology site provides the following recipe for a specially formulated flour improver for mantou:

Huifang Food (Hebei) has recently launched an industrially produced local type of mantou called qiangmian mantou. The production process adds additional flour to the dough, which gives the end-product an extra shiny finish. This development indicates that the industrial production of steamed bread in China has entered a new stage.

In Jilin, an importer of Russian flour is promoting it as the best raw material for the production of mantou. According to that supplier, Russian wheat has a longer growing period, the soil is of higher quality and the flour is better processed. I have not yet been able to verify this myself.

Mantou are especially popular in Qingdao (Shandong). Wanggezhuang Street in that city is lined with mantou sellers. One of these even won a gold award at an international culinary competition in Paris in July 2016.

Chinese cuisine does not really have desserts, but serving a sweet dish at the end of a meal is getting more and more popular in China.A special type of mantou is eaten as such a dessert. They are deep fried and served with a dip of sweetened condensed milk. This dish has been invented in Guangdong with obvious Western influences (compare my blog about traditional Chinese dairy products).

The China Academy for Agricultural Sciences and Haileda Food (Beijing) have jointly developed a type mantou that consists for 30% of potato. The product was launched on June 1, 2015. This is yet another step in the process of changing the potato into a major staple of Chinese cuisine (see my post on potatoes). The researchers have announced that they reached the next step in this R&D project, increasing the percentage of potato to 55% on June 8, 2016. Other potato products will also be developed, like: noodles, or bread.

Maixiangyuan Food Co., Ltd. In Shandong is an interesting company in the industrial production of mantou. It can produce 38 types of mantou and has a production capacity of 25 mt per day. When the company was founded in 2009, it mainly hired people who had lost their job in obsolescent industries, thus giving them an income again. Maixiangyuan is the only industrial manufacturer of mantou that does not use any chemical additives. Its mantou are produced using an in-house developed process based on the traditional recipe. It has 12 machines for producing mantou and bread and 15 food trucks to sell their products directly to consumers. Besides mantou and bread, Maixiangyuan also produces baozi (stuffed steamed buns) and zongzi. The company operates 6 shops of its own and sells through another 600 retailers in surrounding cities and Ji’an, Shandong’s capital. It is China’s only mantou manufacturer with a green certification, and the first to get listed on the stock exchange in 2015. Maixiangyuan has also invested in wheat growing and other related activities, with the aim to control the entire value chain.

Zhongyin Beverages (Henan) has been operating a mantou and baozi chain for a number of years. They are especially popular in Shanghai. Zhongyin’s turnover was RMB 990 mln in 2018 and rumour has it that a considerable part of it is derived from steam buns, with our without stuffing. The company announced that it intended to get listed in 2019.